This is something new. I’m going to host other authors on my blog from time to time to give you a glimpse at the work of some wonderfully talented writers. First up is multi-award winner Lizzi Tremayne. She was a Finalist in the 2013 RWNZ Great Beginnings; Winner of the 2014 RWNZ Pacific Hearts Award, Winner of the 2015 RWNZ Koru Award for Best First Novel, third in Koru Long Novel section, and finalist 2015 Best Indie Book Award.

Lizzi writes both historical and contemporary novels with romantic elements. Today, the spotlight is on her Once Upon a Vet School contemporary veterinary series, #7 Lena Takes a Foal.

Lena has a problem—one that could keep her from graduating from veterinary school. There’s one person who can help her, but will he? After a messy divorce, Kit returns to his first loves—horses and his old veterinary school alma mater, as a resident. Becoming involved with his talented and beautiful equine track student Lena isn’t on the cards. Luckily, she’s sworn off relationships after her last romantic disaster. Besides, if there’s one thing a veterinary school faculty frowns upon, it’s a relationship between a resident and a student. Like oil and water, they just don’t mix.

Mickey’s roan ears, silhouetted against the pale green light filtering into the tiny glade, rose higher and higher before me and my heart froze — he’d never reared this high before. The light disappeared as the horse’s massive body blocked out the sun. A blinding flash of pain and the scent of rotting leaves as my body hit the forest litter, then only blessed darkness.

Someone was there in the darkness before us. Biting my lip, I reined Mickey to a halt at the sight of a strange white pickup truck. It glowed in the light of the dim bulb above the stable yard. The barn door creaked as it swung open, then closed behind the figure of a tall man. There weren’t any men boarding horses here.

I swallowed hard, glancing from side to side to see if anyone else was around, my fingers tightening on the reins. Mickey backed up a step, his bit clanking as he threw his head, and I gritted my teeth to keep from crying out with pain at the motion. The figure turned to face us.

Kit Allen, a surgery resident from the veterinary school. I let out my breath and shivered as the butterflies dancing in my stomach nearly overcame even the throbbing in my leg.

He walked toward me and I squeezed my legs to move my horse forward before I thought. I yelped but bit it off.

“What the heck are you doing out riding at this hour?” His brows narrowed as I rode up to him. “And what have you done to your face?”

“Ahhh… we had a… disagreement about going home.”

“Looks like the roan won. Bit late for a ride, isn’t it?”

He set down a bucket full of bandaging materials and reached for one of Mickey’s reins.

“I left mid-afternoon,” I said, wincing. “I only got as far as the glade, a few miles across the fields.”

“Are you okay?” He frowned as his eyes scanned the perfectly cool horse, then his gaze snapped to mine.

“I’ve hurt my leg.” My attempt at nonchalance came out as a whine. My left foot hung free of the stirrup — the leg hurt too much to do anything else.

“What have you done with Lena?” Kit muttered, as he moved to the horse’s near side and froze. He stared at the swelling bulging above the top of my boot, all the way to mid-thigh, then at my eyes, as comprehension dawned. “Is this horse named Mickey? What happened?”

I took a deep breath. I didn’t want anyone to know, especially someone from the vet school.

“He fell? It’s flat out there.” His voice was terse and the furrows on his brow deepened.

“He went over backwards,” I whispered, my heart in my throat.

“That riding school he came from — ” He stopped and gritted his teeth. “Anyway, you’re hurt,” he said, his voice softening. “Can you get down?”

I shook my head.

“I was wondering how I’d get off,” I said, surveying the rickety old corral fences.

“Let me help.” He was tall enough to hold me around the waist and pull me carefully from the saddle, while I sternly told the butterflies to go to play somewhere else. I clamped my jaws together when my bad limb bumped against his, but I couldn’t help gasping when it hit the dirt.

“I’ll put the horse away and give you a ride,” Kit said and released me as soon as I could bear weight on it.

“— good thing you were wearing that thing. There’s a great dent in it.” He raised a brow at me, eyeing the back of my helmet. “You were knocked out, weren’t you?”

I closed my eyes and took a deep breath. “I don’t know.”

“Right. I don’t know what you had planned, but you won’t manage the heavy clutch in your old truck with that leg, will you?”

“I hadn’t actually thought past getting back to the barn in one piece,” I mumbled, mostly to myself, as he led the horse away. 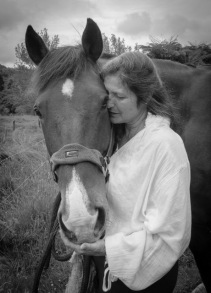 Author Bio:    Lizzi grew up riding wild in the Santa Cruz Mountain redwoods, became an equine veterinarian at UC Davis School of Veterinary Medicine, practised in the California Pony Express and Gold Country before emigrating to New Zealand. When not writing, she’s swinging a rapier or shooting a bow in medieval garb, riding, driving a carriage or playing on her farm, singing, or working as an equine veterinarian or science teacher. She is multiply published and awarded in special interest magazines and veterinary periodicals.

Published by K A Servian

View all posts by K A Servian

You can change your mind at any time by clicking the unsubscribe link in the footer of any email you receive from us, or by contacting us via the contact page. We will treat your information with respect. We would not sell or compromise your data in any way.